This is too easy to forget 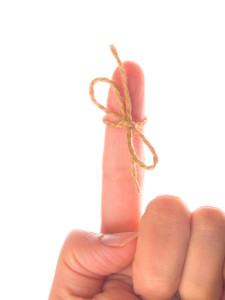 Most of us use calendars to add events that we need to remember. Some of us may write things down on sticky notes and leave them around so we don’t forget. If you use Gmail for your email service, there is another great way to set up reminders – and it’s free.  Don’t have Gmail? It’s easy to set up a free, personal account at gmail.com.

Within Gmail you have access to Google Docs. Google Docs has a great free add-on called “Add Reminders”. Once you have signed into your Gmail account and switch over to your Docs page you can download and install this free add-on. Once installed, just open a new spreadsheet file and give it a name, like “Reminders”. Then go to the Add-on button and choose your newly downloaded add-on. It is very easy to use and will all but walk you through setting up reminders. Just put in the email address, task, and date then save the file. Once setup, it will  automatically email you or anyone you choose a reminder that a particular task is about to be due.

Never forget about where you stuck that sticky note is or to look at your calendar and still be aware of an upcoming task. You may even be like me and like, and use multiple reminders for important dates like anniversaries which will help avoid getting into trouble that could result in sleeping on the couch.
I hope you have found this helpful. If you have any questions, please feel free to post them below. Also, make sure you follow and friend us through social media at Twitter or Facebook.

Did you know you can use unlimited email addresses in your Gmail account? I would be willing to bet a lot of you out there have a Gmail account.  In my opinion, Google’s Gmail is the best email client you can have.  Like so many other email providers, Gmail is free to sign up for and use.  It has many features that can be very helpful.  One of those features is the ability to use an unlimited number of email address for yourself.  I know this sounds far fetched but it’s true.  Let me explain.

By adding punctuation, like a period or plus sign anywhere in the front part of your address you can create an additional email address for your inbox.  The front part is anything in front of the @ sign.  By adding a period it will change your email address just enough that you can use a filter to move messages to that email address into folders or even directly to the trash. Here are a few examples of what I mean:

john.doe@gmail.com works just the same as johndoe@gmail.com. What’s more, you can add a plus sign and any word before the @ sign (e.g. johndoe+mostlikelyspam@gmail.com) and messages will still be sent to your inbox.

Now you may be asking, “Why in the world do I care that I can have unlimited email addresses”?  Well, the answer to that is simple.  Here are a few reasons why this can be a good thing.

The next time you sign up for a newsletter or a website makes you enter in your email address, use an address like johndoe+spam@gmail.com. That way, you can filter out everything sent to this address to a low-priority label or folder. There are a couple of different ways that Gmail allows you to mark messages as unimportant, or categorize them.

Depending on how in depth you would want to go, you could even add a specific word for everything you sign up for: johndoe+website1@gmail.com for example. This might eventually become more trouble than its worth, but it does give you the ability to know how many emails a certain provider is sending you or even if they are selling your email address.  You can also set up filters to send all of a particular email directly to a specific folder or straight to the trash.

There are many ways you can use this filtering to help keep your inbox more organized. I have only outlined a few, but the sky truly is the limit.

I hope you have found this interesting. If you’ve found another way this can be useful, let us know on one of our social media channels such as Twitter or Facebook.

As we look at the current technologies that are developing, how do you know what the next trend will be?  You don’t have to look much farther than your email.  Email is not cutting edge, or flashy but it certainly has become the leading indicator of where IT is going.  Social media has supplanted Email for immediacy but Email continues to be at the core of any business because it is anecdotal and provides a timeline for ideas and decisions in many organizations.

Depending on your age and experience, you may look at this timeline from a different perspective. Back in the early days of IT, PCs and Macs only satisfied the personal needs of its user.  In order to provide some level of interaction with other PC and Mac users Email was designed as the primary method of communication.  Email to IT is like Morse Code is to the Telephone for the first 100 years of its existence.  The Telegraph using Morse code, and later a proprietary signaling method, did not become completely eliminated until February 2006, when the Telephone was ubiquitous.  My view is that Email will not be supplanted until Social Media is the primary method of communication for technology users of all ages.

When business became based on the personal computer, email developed into the “Gotta Have It” application.  It drove IT, and was required for business to effectively communicate across offices and time zones.  When the Internet developed into commercial usage in the 1990s, many of us used Email as the first application sending packets over the Internet to a remote server somewhere in the cloud.  When Windows became the defacto business desktop OS, we all clamored for a Windows Mail program, and Outlook survives to this day with Exchange Server.  When the cell phone developed into a PDA what was the first application that generated the most growth for Wireless Service Providers and devices such as Blackberry, iPhone, and Android…of course it was Email on your phone.

In today’s environment Email has become the most adopted cloud based application, whether you are using Gmail, Yahoo, or subscribe to a hosted business solution such as Office365 or Google Docs.  Email is the first thing we let go to the cloud.

So what comes next?  Let history show you…Think of the next most important app used after Email at each point of your timeline, is it ERP, CRM, Desktop Productivity, or the Desktop OS itself?  That answer will be the next service you will move to the cloud.