Ready to take the Windows 10 Plunge?

Over the next couple of weeks, you will be able to find a plethora of articles and blog posts on how to upgrade to Windows 10, along with performance reviews. I would like to share with you my Windows 10 upgrade experience.  Which I did this morning, on the system I am currently typing this blog. I also want to talk about my initial experience using the new operating system.

I need to let you know that this is not my first installation of Windows 10. I have had a prerelease version running on a couple of virtual machines for a few months now. The experience I had with the prerelease made me feel comfortable with upgrading my main desktop in my home-office. I want you to know how critical the PC being upgraded is to me. My main PC is one of the most important tools I have for work and for home life. So, the first thing I did was confirm a backup of my important data. Thanks to Carbonite, I was not worried. The next thing I needed to do was get the installation media for the release version of Windows 10. Most of us know about the icon that appeared in our system tray that will allow us to upgrade to Windows 10. To keep servers from going down and bandwidth from being obliterated, Microsoft is allowing upgrades in steps, so your PC may not have been able to upgrade on July 29, while others could. I was not one of the lucky ones to get the go ahead on the 29th. However, I did get a notice about being able to download the installer from this location: Media Creation Tool. This option is for those of us comfortable with installing an operating system.

First, I downloaded the .ISO file and burned it to a DVD (must be a DVD, not a CD). Keep in mind that this is for Windows 10 Home or Pro. There are different versions of Windows 10. Home and Pro are what were released for PC and laptop this week. If your current version of Windows is Enterprise, you can upgrade to Pro now. Otherwise you will need to wait until the Enterprise version has been released. Once you upgrade an older Windows Enterprise version to 10 Pro, I am not sure if you can freely upgrade to Enterprise again when it is released. I upgraded Windows 7 Pro to Windows 10 Pro.

So, what was the process like? I started by shutting down my PC and booting to the Windows 10 DVD. I followed the prompts, got to the option to perform an upgrade, and hit a wall. The installation process told me that I need to reboot my PC and start the installation process while in Windows. My bad, the prerelease versions were fresh installs, so I did not know this about performing an upgrade. I booted back into Windows 7 and launched the upgrade installation. It immediately asked if I wanted to allow updates. Knowing I can change it later, I let the system go ahead with what it wanted. At another point, I was offered the options to install Windows 10 Pro and whether I desired to keep my existing personal data. I checked the boxes for both options. I was warned that multiple reboots would occur and they did. The process started in Windows 7 and rebooted to its own installation procedure (as seen here): 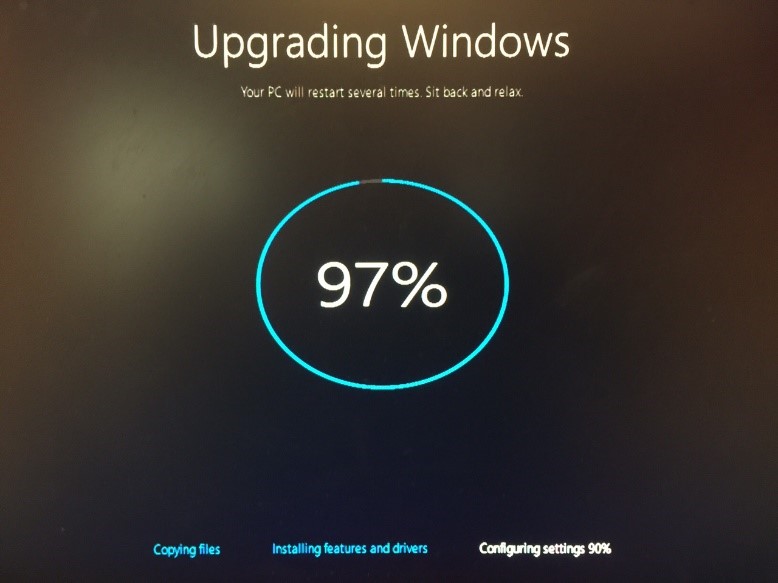 After this process hit 100 percent, the PC rebooted, told me ‘We are settings things up for you’ and then launched Windows 10. The first thing I noticed was that the display was at the lowest resolution and only one of my two monitors was active. I performed a Windows Update just for the sake of it and waited while drivers started being recognized. After five minutes, I rebooted. This time, my second monitor came up and I was able to change to the monitor’s native resolutions. This is what my desktop looked like: 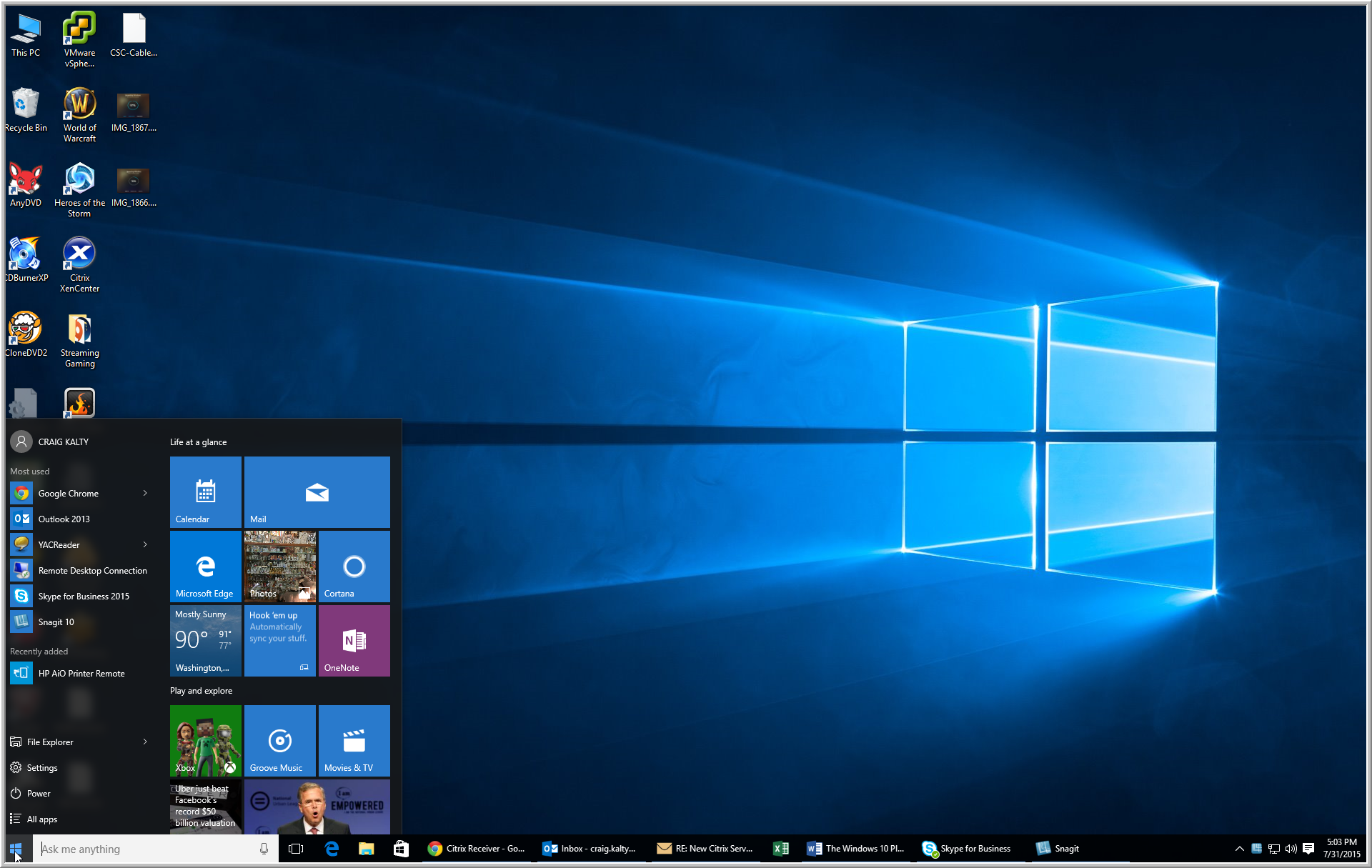 I was/am up and running. Now I needed to test my applications. I tested the following applications which are crucial to me:

The only priority application that did not function was the Cisco VPN client. When it failed to launch, I tried to reinstall it and Windows 10 told me ‘not gonna happen’. I was informed that there is no compatibility and the program will not be installed. Edge, the replacement for Internet Explorer, worked pretty well. The only issue I had there was that it will not run or install Java (by design – more about that in another blog). I use Chrome as well and it worked just fine. The last thing I am having trouble with is my fingerprint reader. I have one for my desktop and Windows 10 is not recognizing it (yet).

I have been operating on Windows 10 all day now and I can tell you that it has been a very easy
adjustment coming from a Windows 7 preference and not having touch screens. The start button is really nice. The mix of the old Metro interface along with menu access is a good touch. Cortana is very responsive. Using voice, I asked for file searches, web searches, map searches, and more. Most of the time I was given what I was looking for. One thing I noticed in searches is that I got back a lot of web clutter when looking for something local, but there is a button to select local items and that removed the web clutter.

I will play around with Windows 10 further and probably blog about my experiences in the future. In the meantime, I just want to point out that this has been an easy update and one that I have little hesitation to recommend (it is still new). Just please preform a backup of your data before you try an in-place upgrade. Better safe than sorry. Also, better safe than blaming Craig because he said it worked well for him.

Please feel free to share your own Windows 10 upgrade experience below. You can also reach me directly by email.

2 thoughts on “Taking the Windows 10 Plunge”